The life line to reality disappears in the works of Marianne Grønnow. Eternity and endlessness seem to be the core of this entropic, yet fantastic reality escape attempt. Grønnows fascination with fiction and dreamscapes is clear. This is representations of a kind of otherworldliness appearing in what I would charactarize as visions of the universe in a sci-fi/gothic-neoromantic kind of way. Her use of symbolism circles aroundt the eternal/eternity and at the same time perishable and transitory. The flower often used in 16th and 17th century vanitas, is used here partly as an element of ornamentation, and partly unavoidably also implied with the symbolic meanings traditionally ascribed to the flower. An other frequent aspect is ornamentation (philligran) which is a reappearing motive, the use of dots, the deep endless background sometimes gone against with an almost flat surface, as to emphasize the contrasts of the dreams. Grønnow’s paintings can also be considered a kind of allegory in their fragmentations and hidden maybe uncomprehensalble meanings. They can be seen as a kind of dream stories which are narrative to a certain extend. With an almost literary touch they are sometimes divided into different levels: foreground, middleground, background, as to lead the spectator into a story keeping attention to the painterly levels, that will part one section from the other. These contrasts will like the levels lead the spectator back and forth between elements, seducting her into the dreamscape of the painting. Excerpts from press release, Sanne Kofod, Brief Encounter, Sophienholm Enlarge by clicking on image 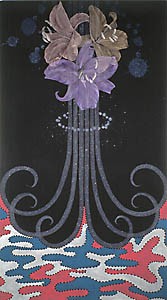 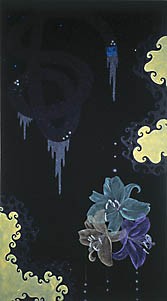 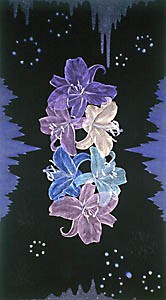 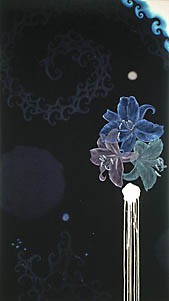