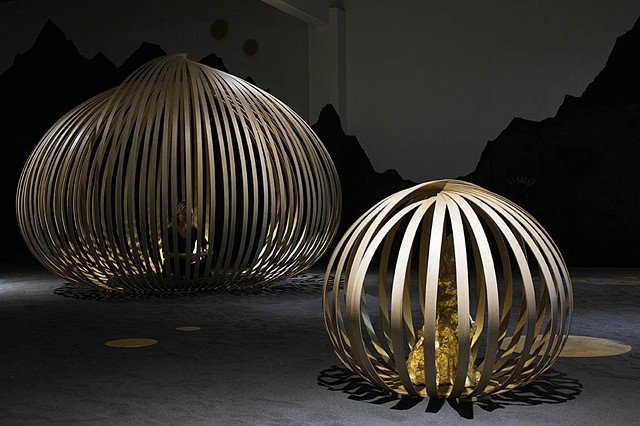 Marianne Therese Grønnow was until the mid-00's best known as a painter of large ornamental paintings based on flower and vanitas motifs. Since 2003, she has also worked with installation and mixed media. In the large installations, she uses paper, cardboard, aluminum and wood, and the themes could be the quiet before or after a disaster, and the idea of constant change and transcendence. Marianne Therese Grønnow often creates meditative dreamscapes and in her work is a tone of melancholy, loss and longing.

Marianne Therese Grønnow has, in addition to her artistic practice, also worked in the field of dance, theater and performance, and she has done several commissions, among others for the Faculty of Life Sciences (University of Copenhagen) and for the Danish Building and Property Agency. Marianne Therese Grønnow´s works are featured in the collections of the National Gallery of Denmark, Malmö Art Museum, New Carlsberg Foundation and the Danish Arts Foundation.

Marianne Therese Grønnow is educated at the Royal Danish Academy of Fine Arts and has received several grants and prizes for her artistic work: Among others Danish Arts Foundation's three-year work grant, Anne Marie Carl Nielsen, born Telmányi honorary grant, Jens Søndergaard and Wife Memorial grant - and most recently Niels Wessel Bagge's honorary grant. Moreover, her works have been awarded by the Danish Arts Foundation in 2006 and 2017.